Jogging – a pledge of harmony, health and longevity 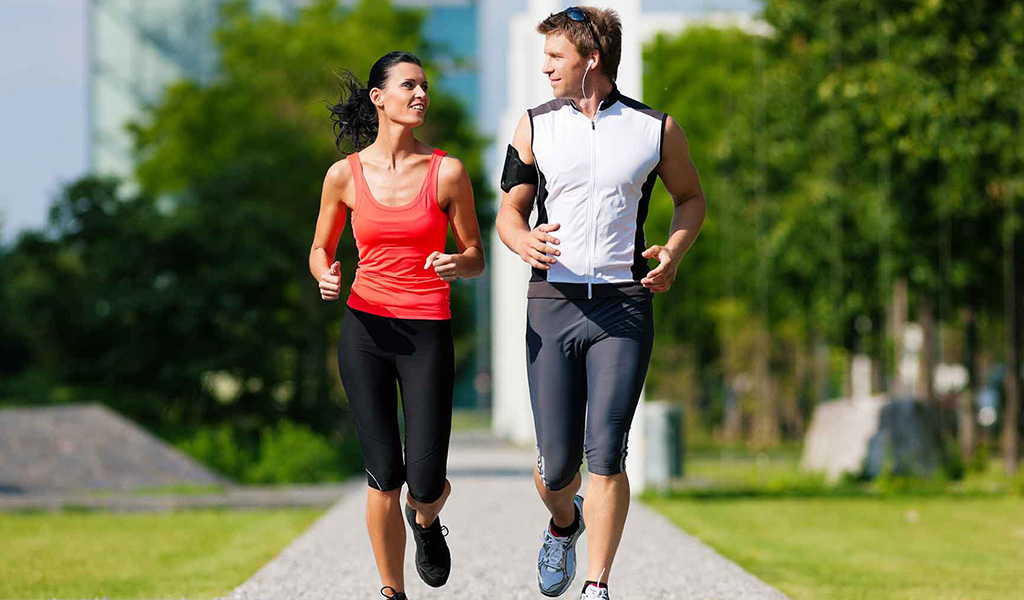 In the 70s of the twentieth century, almost the entire civilized world was fascinated by jogging. Gradually, his popularity subsided, but jogging to this day remains one of the most effective and affordable ways to lose weight and strengthen the cardiovascular system. Consider how it differs from other types of running, how it affects the body, and how to properly engage in order to lose weight, increase endurance, strengthen the heart and blood vessels.

Jogging is a universal kind of load, it is used by both champions and people far from sport, who for the first time decided to take up their physical form. Many, starting with small daily runs, are so involved that they completely change their lifestyle and start running marathons.

It differs from walking a trot by having a period of separation from the surface of both legs, the so-called flight phase. And jogging differs from normal running in that the phase of flight with it is minimal – it is only necessary to push the foot off the ground, as the second immediately lands, reducing the time spent by the body without support to the lowest values.

You can master jogging, observing the following conditions:

When jogging, all muscles that do not participate in body movement should be relaxed. This also applies to the muscles of the legs, which should be relaxed for a short time while the phase of separation from the ground lasts. Due to the low intensity and economical movements, it is possible to postpone the onset of fatigue as much as possible and minimize the risk of injury.

But what muscles work when jogging:

Jogging refers to aerobic exercise, which during regular exercises have a powerful healing effect on the body:

The added benefit of jogging is that they are usually practiced outdoors. This contributes to an even greater enrichment of blood with oxygen, hardening of the body, emotional lift.

For the first time about the benefits of jogging, the New Zealand run coach Arthur Lydiard told the world in 1961. Later, he wrote several books popularizing jogging. Thanks to these books, as well as the asceticism of another American Jim Ficks jogging popularizer, jogging became very popular throughout the world in the 1970s.

Hundreds of thousands of people in the 70s began to jog in order to improve health and increase life expectancy. In the people, this occupation was called run from a heart attack. The boom of the popularity of cowards began to subside only in the mid-80s, the death of its popularizer Jim Fix at the age of 52 from a heart attack that occurred during the morning run contributed to this. At the autopsy, it was found that the athlete’s vessels underwent strong sclerotic changes.

However, this case should not be in doubt about the benefits of jogging. After all, up to 35 years old, Jim Fix had about 30 kg of excess weight and smoked 2 packs of cigarettes a day. Most likely, by the time he started to run with enthusiasm, his arteries were already in poor condition, and if he had not changed his way of life, he would have broken off even earlier.

The discoverer of the benefits of jogging Arthur Lydiard lived 87 years, until the last day, giving lectures on health running.

Impact on the psyche

Systematic jogging strengthens the nervous system and has a positive effect on the psyche. In addition, there is also such a phenomenon as the runner’s euphoria – feelings of unreasonable joy and happiness, similar to the effect of alcohol or drugs that appear after a long run.

With a runner’s euphoria, besides the tides of joy and happiness, athletes feel a dullness of pain, reduced fatigue, self-reliance, and admiration for the world around them. Although this effect is similar to the action of drugs, but unlike them, the euphoria from running does not bring any harm to the body.

Runner euphoria, like narcotic drugs, is inherent addiction syndrome. That is, with regular long runs to achieve euphoria, an ever greater duration of continuous running is required. There is an opinion that this is what motivates athletes to run for long and extra-long distances, to participate in marathons and ultra-marathons.

It is extremely important to choose a place for jogging because your safety will largely depend on it. Strongly not recommended to run:

To benefit from jogging, you must follow these rules:

To reduce the impact load on the joints, it is necessary:

Clothing should be of hygroscopic breathable materials, not constraining movement. Women need a sports bra to prevent bust droop.

If you practice jogging for weight loss, then you need to limit yourself in nutrition in order to achieve a daily calorie deficit. If you eat the same amount of calories as consumed, or more, then you will not be able to lose weight.

The time interval between eating and jogging should be at least 1.5-2 hours. If you feel thirsty while running, you can drink a little water, at long distances you can be supported by chocolate and dried fruit.

See also: How to pump the hamstrings

Jogging is contraindicated in the following categories of persons: